At the origins of the Domaine Girard

In the Girard family, muscadet goes back to the 1940s-1950s when at the Rebourgère, a hamlet of Maisdon-sur-Sèvre, between two rivers (the Sèvre and the Main), at the heart of the vineyard of the region of Nantes, Gaston had to work from an early age for the family farm. He was the only son of Marcel and Gabrielle Girard and helped his mother, a brave and ambitious woman with a strong character. She had just lost her husband who came from the war with illness. At this time, like in most farms, they did mixed farming: some cattle, some cereal crop and some vine.

In 1961, Gaston married Georgette, a young woman from a nearby village called La Haie-Fouassière. Together, they never stopped making the plantation grow, giving up mixed farming and cattle to focus on the vine only. In the 1970s, they developed direct selling, being pioneers of this type of marketing. While Gaston was dealing with the wine-making process, the whole family was busy with the bottling, the labelling and the wrapping of the product. At the end of the week the family had to cross Brittany, Normandy and the region of Nantes to deliver wine to the cafés, the restaurants and the private clients. First with a car and a trailer, that were soon replaced by a Citroën “H” van. What an adventure!

Between legacy and modernity 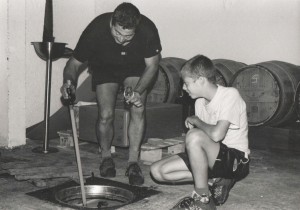 The third generation came with Patrick, the son of the family. From his first steps, he followed his father in the vines. After studying wine-making, he joined his father on the plantation in 198*. After a few years working with his parents, he took over the plantation in 1991, when Gaston retired. However 1991 was a peculiar year, Patrick married Martine in May but the month before the vine froze and the crop was annihilated. But Patrick and Martine overcame these difficulties with bravery and ambition, and years after years, with experience and knowledge acquired by the former generations, improved by the modern technics in the vines and in the wine cellar, they made the familial plantation grow.

The motto of the family is the quality of the work, the precision and the flawless quality of the wine that was awarded multiple times with gold, silver and bronze at the different competition in Paris, Nantes, Vertou and Maisdon-sur-Sèvre. Today the Domaine Girard counts 93 acres of vine in reasoned culture. 60% of the crop is sold directly and the range of wine is diversified. Patrick works at the shaping of the vine, at the wine making and the commercialisation, Martine works at the wine cellar, she prepares the orders and she deals with administrative and accounting work. The 4th generation is now arriving with Guillaume, Patrick and Martine’s son. Since 2013 and after studying wine-making and marketing, he works with his parents on the plantation, combining, like his father before him, tradition and modernity.

The harvesting period is finished and winter jobs have just started. We will be pruning our vines until late March…